Persistent pain after a cervical fusion

I recently had the opportunity to evaluate and operate on a really interesting case.  This is a man in his late 40’s who had an anterior cervical discectomy and fusion 2 and 1/2 years ago.  Prior to his operation, he had really severe right sided C7 pain.  After his operation, even though it was done by an experienced surgeon and appeared to be done well, his pain persisted.  Prior to coming to see me, he picked out this image on his pain diagram. 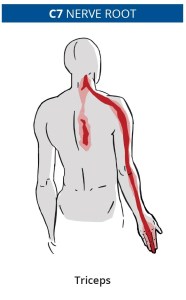 In my office, it was clear that he was really suffering from a C7 radiculopathy.  He had pain all the way down his right arm to the back of his hand.  He couldn’t sleep at night, and he was basically stuck on pain pills.  I really carefully reviewed his CT scan that was obtained after his fusion, and here is what I saw….

We had a really long discussion.  We talked over all of the options that he had for treating his pain, and ultimately we decided to go ahead with a cervical microforaminotomy.  This is an operation that I really like.  I’ve done many of them in the past 5 years and I feel like it is an operation that is not used as often as it should be.  I have a blog post on my philosophy of why cervical microforaminotomies work really well.

In this case, it was the perfect operation for him.  He woke up without the same nerve pain he had been living with for years.

Dr. Gollogly completed his undergraduate education in biology at Reed College in Portland, Ore. He earned his medical degree from the University of Washington School of Medicine.